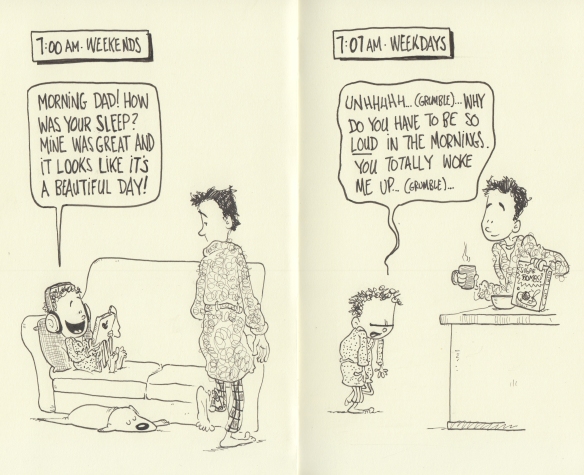 This drawing pretty much sums it up…

I had rather large breakfast this morning which in turn gave me a bit of a gut ache which in turn led to an examination of my stomach that further led to me poking around my belly button which reminded me of you. Well, more your future child than you. After birth, babies go through a rapid and diverse transformation from beautiful to gross, to beautiful to gross to beautiful (this repeats based on a myriad of factors and how often they throw-up, poop and pee all over you – more on that later). I would like to share with you one such transformation that is both incredible and pretty gross so that you go into things with wider eyes than I did.

Firstly, should the doctor and her team afford you the opportunity to cut the umbilical chord immediately after your child’s birth, jump on it. It is without a doubt one of the strangest and most memorable things you’ll ever do. My recollection of the event is a bit blurry as birth is a wonderfully chaotic and traumatic thing with lots of sweating, shouting, beeping noises and blood – and that was just me. I do recall looking down at my wife with complete amazement and admiration for what she’d just done, over at my new son covered in white paste and blood and rasping like an old man when one of the medical team thrust a pair of scissors in my hand and said, “Cut the chord dad!”. Imagine if you will, severing the life line that your wife grew, that kept your child alive in her stomach for 9 months, with a pair of scissors. You’ll never look at that tool the same way again. Take a moment to acknowledge the magnitude of what you’re doing then use all the bloody strength you posses because by this point you’ll be exhausted. Before you know it, the medical team will make a closer cut to your child’s belly and the chord will be clamped and covered with a bandaid. Here’s the next interesting bit.

For the next few weeks that remaining umbilical chord will get darker and harder until a crusty little chunk is left. If you’re the kind of person who likes to pick scabs this will be an incredible temptation for you. The contrast between the perfectly smooth and wonderfully soft baby skin and this crusty bit of stuff is too large to ignore. Hold tight man. Let nature do it’s thing. One day it will fall off. You might not even know when (as was our case which left me wondering for days if it had fallen into my bed, my food, my clothes…). Before long that reminder of the lifeline will be gone and it won’t’ be until you’ve had a big meal that forces you to poke at your gut that you’ll be reminded of the miracle that is this whole parenting thing.

I’ve included a drawing from the Art of Dad archives from 11 years ago that I hope you enjoy. 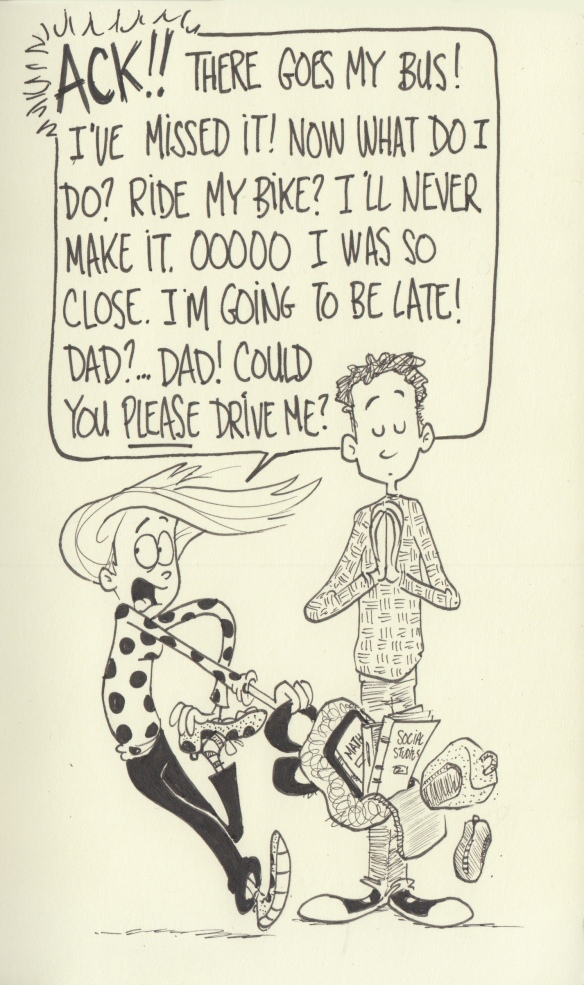 I’ve seen the article “Quit Doing These 8 Things For Your Teen This Year If You Want To Raise An Adult” zipping around FB and I like it. While “harassing your kid to be on time” wasn’t on the list it’s none-the-less one I feel caught doing most mornings. Can’t everyone see the time slipping by during yet another leisurely breakfast? How do they think they can make lunch, get dressed, pack their bags and get out the door in ten minutes when it’s never been done before? Most mornings I’m a buzzing time bomb, calling out “It’s 7:31. Now it’s 7:43!” No more. I’m adopting the mantra that learning to be late is a good thing. If you don’t like the consequences then change your behaviours.

My parental safety net default was put to the test this past morning. My daughter’s bus leaves at 8:03. As far back as 7:35 I could see things were going to go south. Come 7:55 I was sure of it. By 8:04 it was confirmed. I watched passively as the temperature rose and the tornado grew. When the bus whizzed past and the backpack fell to the floor, open, amidst a dizzying twirling teen I waited patiently for the realization to hit, options to be considered. I was available to fill in as the emergency taxi this time but I’m adjusting my routine to be around less during departure time. It’s not that I want to see my daughter stressed out in the morning. It’s more about wanting her to learn the consequences of messing up. Taking responsibility for ourselves is a lifelong pursuit and far better it be over a missed bus then something that has real effect later on in life.

Sometimes the best thing we can do for our kids is to stand back and watch. We’ll see how things go for the rest of the week… 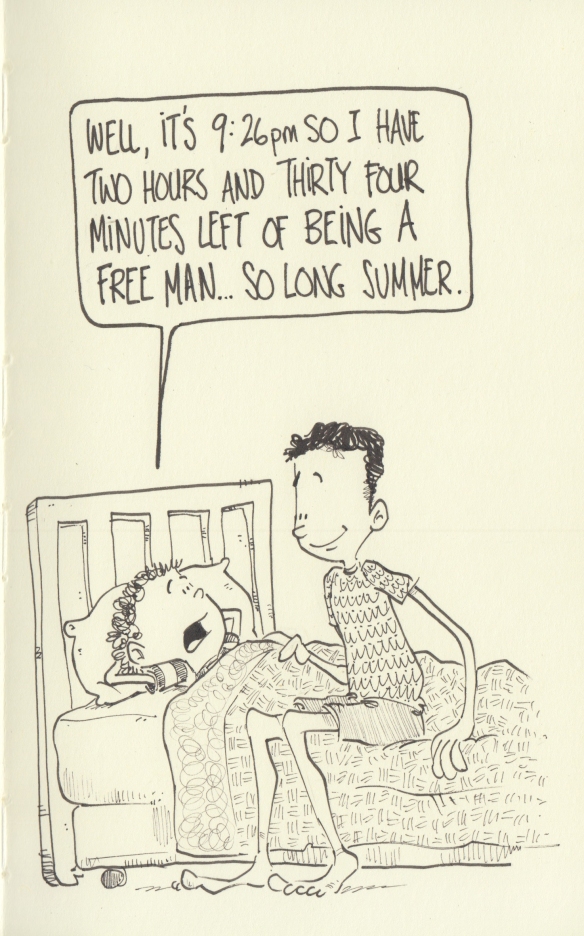 We all know the days are long and the years are short, but summer, it just seems to fly by every year. There is a palpable freedom that comes with the summer months, best appreciated during one’s school years. It’s an easy comparison: sitting a desk or riding your bike/going for a hike/eating ice cream in the middle of the day/going to camp/wondering what to do to fill a day… Summer comes and we all take a deep breath to relax and when we release fully September has hit us and the new year starts.

When the kids were young I used to lie awake at night wondering if they’d like their teacher, if their friends would stay their friends, what they’d learn to love, what they’d learn to move on from. Now, with high school a part of our lives and another in middle school I find myself writing this late at night before the first day of school wondering, will they like their teacher, will their friends stay their friends, what will they learn to love and what will they learn to move on from. I guess not much has changed but it feels like the effects of these questions becomes more intense as they get older. 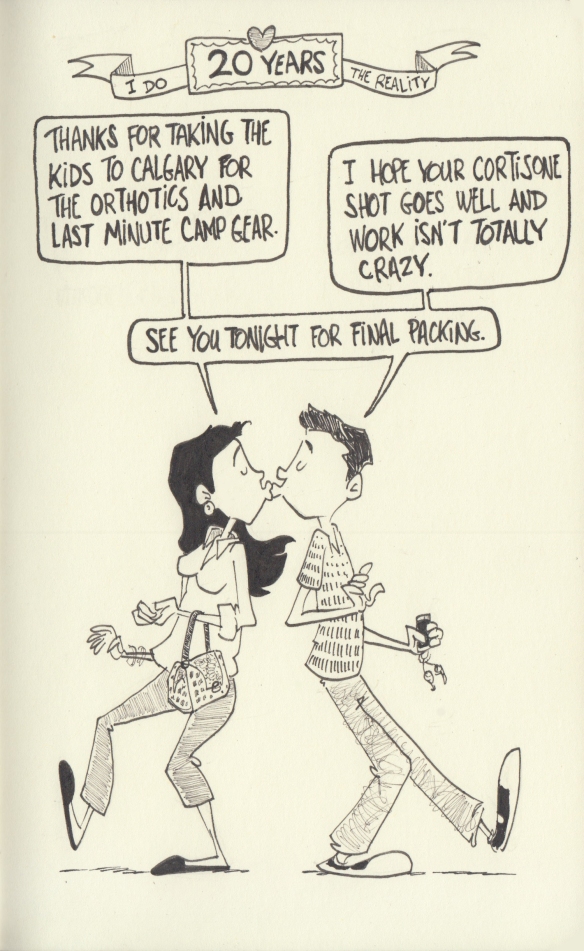 Twenty years ago we stood on a deck over-looking Manitowaning Bay and said “I do”. It has been an incredible ride so far filled with world travel, two fantastic kids, interesting careers, an overly shedding dog, a few tears and many more laughs. It hasn’t always been easy. Marriage takes work and gets messy from time to time. Finding the right partner to pick you up when you’re down, celebrate your successes and help you clean up those messes is what makes it worth living. I found mine and can proudly say we’ve made quite a life over the past 20 years. While today’s anniversary insisted that it should be filled with cortisone shots, orthotics and the inevitably late night packing, I wouldn’t have it any other way.

Do you ever have those mornings, when your alarm goes off and you have the best of intentions to hit the gym or catch-up on emails before the steady thrum of activity that consumes you’re every being when the kids wake-up begins and-you-just-can’t-pull-yourself-out-of-the-comfy-confines-of-your-soft-warm-bed…

Yeah, I know the feeling. 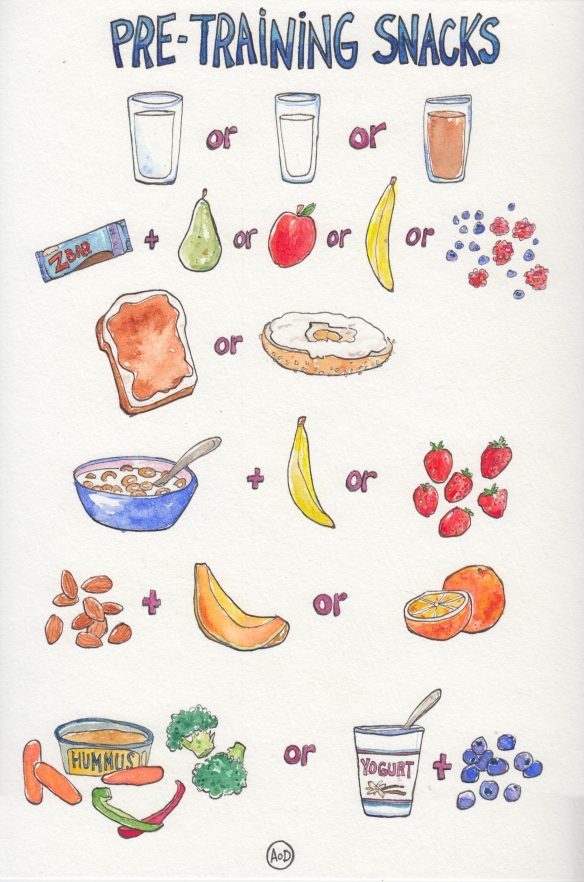 If your kids are anything like mine, they come home from school famished. Ravenous. The default is to go for the easy stuff – packaged crap that is high in sugar and tastes delicious. Well, with the help of the Canadian Sport Institute and our Canmore Nordic Ski Club, (we had a nutritionist speak to us about healthy food choices for student athletes), I’ve whittled down an excellent list into some options I believe are easy for my kids to help themselves to, are better for them and also taste delicious. My hope is that this eliminates the question that invariably follows the dumping of their knapsack and plodding over to wherever I happen to be when they come home which is, “What should I have to eat?”

“Feast your eyes on the fridge door!” I shall reply in a jolly tone. “And choose whatever tickles your taste buds!” The rest, is up to them.

Print off a copy, slap it on your fridge and let me know if your day becomes “What should I have to eat” free! 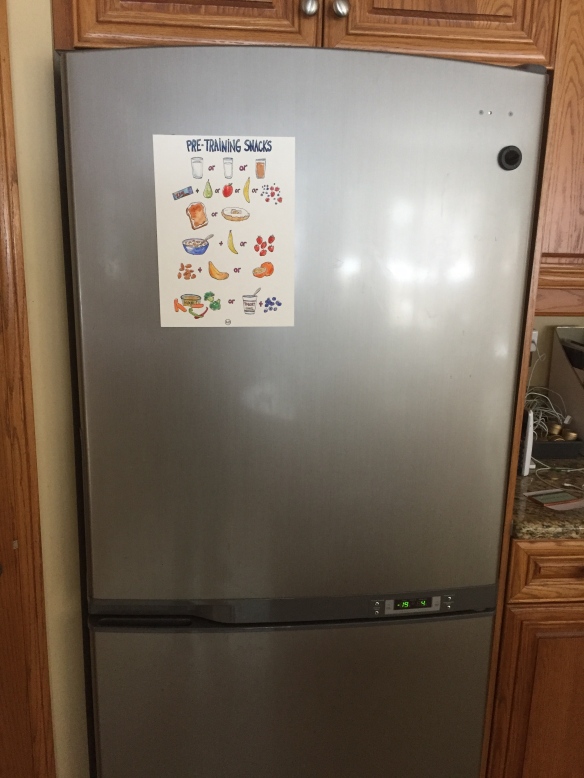 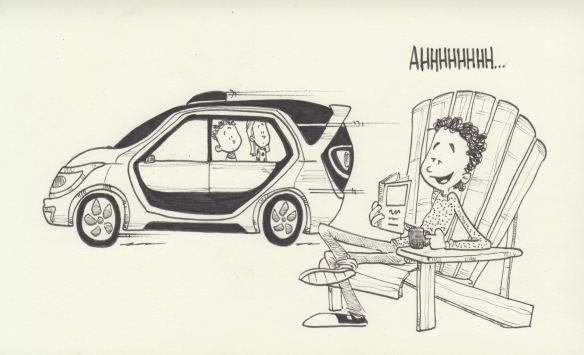 Raise your hand if you’re exhausted from shuttling your kids to and from school, playdates, after school activities, sports events…. the list never ends. I recently created a spreadsheet to share with a couple of other families in an effort to share the load in an attempt to alleviate that last minute anxious texting and calling. It’s sorta working…

Well, our friends in the auto industry are bringing us the future and it’s looking good. At the Consumer Electrics Show in Las Vegas Chrysler unveiled an electric, self-driving minivan that could completely eliminate the taxi dad and mom roles. Just imagine yourself grabbing another hot drink and picking up your book while the “Portal” whisks your kids to dance/ski/soccer/music/daycare/school… Ok, maybe it’s not quite like that but we taxi parents can dream, can’t we? 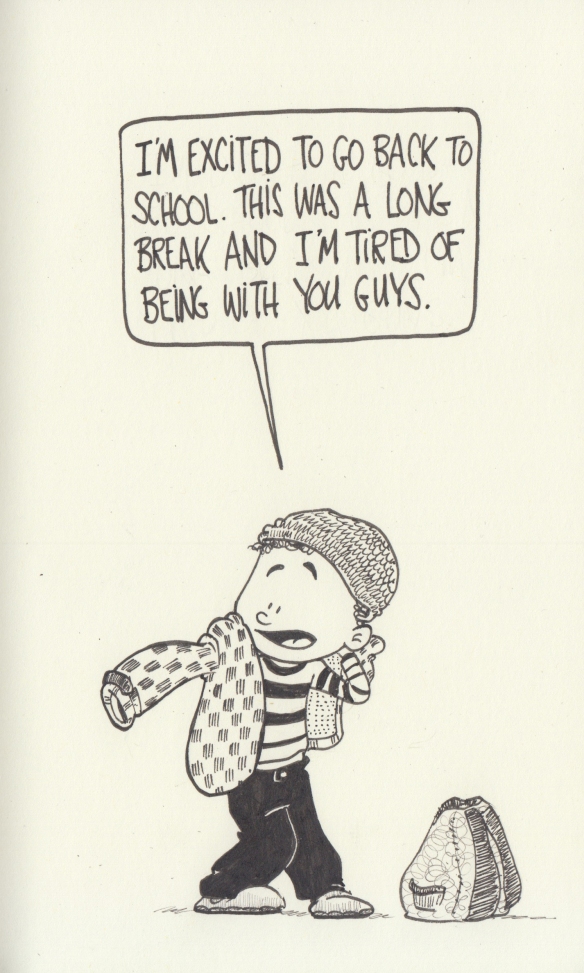 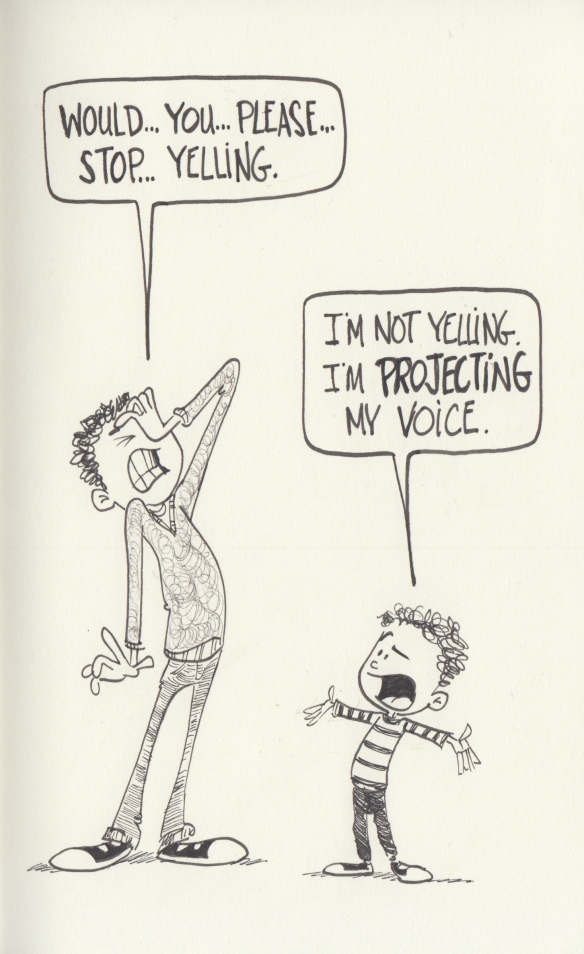 We can argue all we want over the semantics, bottom line is I need the volume button lowered…