These moments can be few and far between so when they do pop up ya gotta savour them. 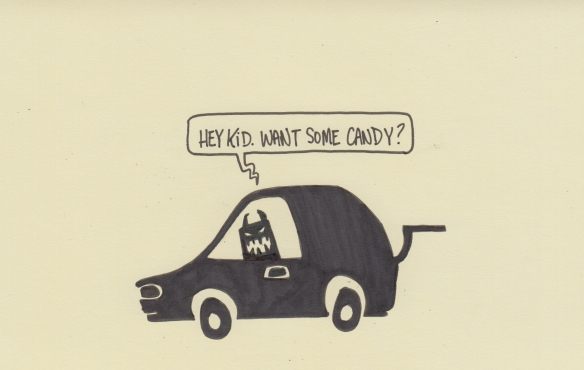 Dear Jerk in the blue Volkswagen with the red bumper and silver rear spoiler:

You may have thought that calling out to my son and his friend while they were riding their bikes, asking if they wanted candy from the safety of your car was a funny thing to do. You may have been trying to impress your two silent buddies in the back seat. I’m going to give you the benefit of the doubt, that your intentions were only idiotic and not anything more salacious, but there is no place for that kind of idiocy in our community.

You have the freedom of four wheels to take you wherever you want to go. Do you remember being a kid, not that long ago judging from your description, being on two wheels? Do you remember what it was like to have the freedom to ride your bike through back alleys and over dirt trails? Do you remember that it was and continues to be one of the few times that we as a society give our kids the ability to travel wherever they want to go under their own steam? That’s something precious. The chance to strap on a helmet and wander streets or explore trails without someone breathing down our necks or questioning our decisions. For my son and his buddies it’s also a means to get back and forth to school each day. They feel great about it because it’s their time together, outside, to talk about whatever they want, to go at a speed their parents wouldn’t want to see and to dare one another to hit jumps their parents would tell them to avoid. They believe they’re making a difference to their planet by not having us drive them. They can see their fitness improving. The find value in the most simple of activities. Riding their bikes.  Your question isn’t an innocent one. It takes on a life of its own within the schoolyard playground and you become a monster. The monster gains traction every time its story is passed along  to other families and other school yards. Our streets lose their openness and joy and instead become ribbons of concrete distress and fear. Parents clamp down on time outside and kids wonder if a bogeyman with sweets is lurking in every bush or hiding behind every steering wheel.

You drove off and probably thought nothing more of it but others were left with the aftermath of your actions. How do I best explain to my 10 year old, at 11:00pm at night when he can’t sleep, that people are inherently good? That what he experienced today isn’t typical and that he shouldn’t be afraid to ride his bike again.

What you’re doing, with your “joking”, is stealing his freedom and making him question his place in his community. You’re making him afraid to do what he loves. You’re stoking fear in what it means to be a kid in an adult dominated world.

Is that really what you want? Are you really a monster?

You can argue that you were only having a little fun. That you didn’t mean it. But kids are trusting and that kind of humour isn’t understood. You know that. You were a kid once. So grow up. If you’re old enough to drive a car, respect the community that you’re travelling in. Respect the kids that live in it. Respect yourself. Stop saying stupid things and stop acting like such a jerk.

Respectfully,
The parent of a boy – a boy just like you. 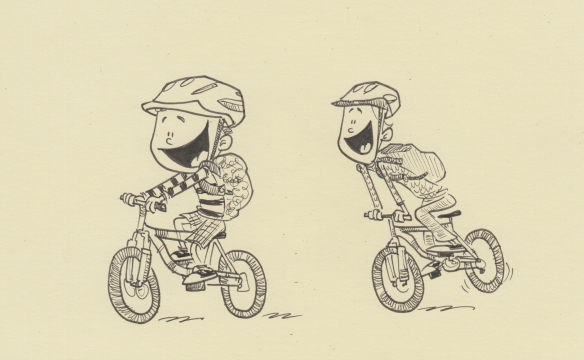 I had absolutely no idea what he was talking about when he first launched into it. Colours and emotions were tossed about. There was evident contempt for having to spend time out of his busy day to talk about something that he’ll “never use”. The funny thing was, we had this great chat for over 10 minutes about how he’d spent his day. Far more detailed than the usual response:

Despite the sheen of negativity, it was clear he had been engaged and listening, because upon further research on my part, he had accurately explained the varying states of self-regulation as popularized by Leah Kuypers in The Zones of Regulation.

Tomorrow we work on self-reflection in an effort to spend more time in the green zone.

I’m not sure what he’s watching to be so up on the rigours of “juvey” (juvenile detention), but he seems pretty damn sure he’s got the comparison nailed.

There was an error retrieving images from Instagram. An attempt will be remade in a few minutes.